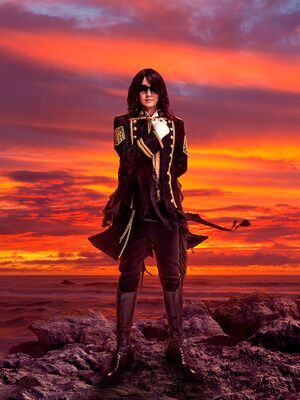 Linked Horizon （リンクトホライズン） is a sister band of Sound Horizon created by Japanese composer Revo to write music for video games, anime, movies, and other forms of art. Often abbreviated as LH or リンホラ (RinHora), Linked Horizon is a collaborative effort with other vocalists, musicians, orchestras, and artists coming together under Revo's direction. Unlike Sound Horizon where Revo creatively forms his own stories and composes music directly for them, Linked Horizon focuses on portraying an already existing story. Since its inception in 2012, Linked Horizon has released 2 albums, 4 singles, and 8 digital-releases. Their 2013 single 自由への進撃 has sold over 250,000 copies, certifying it platinum by The Recording Industry Association of Japan. It peaked at number two on the Oricon chart[1]. In November of 2019, Linked Horizon performed at Saudi Anime Expo in Saudi Arabia. This is Revo's first performance outside of Asia[2].

On June 19, 2012 it was announced that Revo would be composing for the Square Enix 3DS game “Bravely Default: Flying Fairy”. It was also announced that he would be working under the label "Linked Horizon" for any collaboration with other media artists. Their first single ルクセンダルク小紀行 was released on August 22, 2012. In December of 2012 it was announced that Linked Horizon would be providing the opening themes for the anime 進撃の巨人 (Shingeki no Kyojin, Attack on Titan). In 2017, Linked Horizon began a country-wide tour corresponding to the release of their 2nd album 進撃の軌跡. This concert covered 30 cities in Japan, overseas tours in Hong Kong and Taiwan, and eventually spawned a mini-live event in Singapore and Korea entitled "Linked Horizon Live Tour “Shingeki No Kiseki” Memoirs Mini Live". On December 12, 2019, Bravely Default II was announced for the Nintendo Switch. Revo was confirmed to be returning to compose, despite not composing for Bravely Second.

※Revo is the only current official member of Linked Horizon, however, many artists and musicians have made repeat appearances.

Retrieved from "https://shlhw.miraheze.org/w/index.php?title=Linked_Horizon&oldid=5194"
Cookies help us deliver our services. By using our services, you agree to our use of cookies.