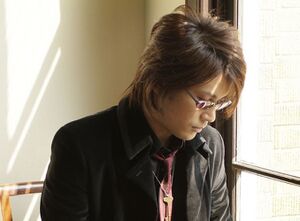 Revo (who's real name is kept private out of respect) was born on June 19th, 1978. His birth is claimed to have been at 5:01 in the morning[1] on a rainy day [2]. The first musical instrument he learned to play was the piano, eventually branching off to an electric organ, wood instruments, reed organs, etc. He mainly learned classical music, but as a boy received an electric guitar. As the years went on, he became obsessed with reproducing songs and making unique sounds with his guitar, but gradually became frustrated with the limitations a single instrument held. Later in his adolescence he purchased an MTR synthesizer and began learning to synthesize electronic music. In high school he joined some bands and produced sound for them but they all fell out of touch in one way or another. Using his musical knowledge Revo began recreating game soundtracks and composing songs for friends. He was at some point a teacher but interviews only hint at his participation in the fitness program at a school. After learning about the internet in the late 1990's he started publishing his compositions under the pseudonym "G.Revo" [3]. When he was 19 he entered the 1997 Koei music contest and got to the final round before losing[4]. The next year, he won first place in the 1998 music contest, with his song being featured in the game 太閤立志伝III [5]. Changing site proxies in around 1998, he became simply "Revo". Many fans believe that his stage name is a reference to the word "Revolution"; Revo commenting that while it wasn't initially his intention, his style of telling stories through music could be seen as a revolution. His name is not a reference to a cigarette brand, despite popular belief [6].

Beyond this, Revo is said to like red wine, enjoy JRPGs, spicy food, and Spain being his favorite country. While he tries not to listen to other band's music, so that they won't influence his style, Revo enjoys Spitz and B'z [7]. He claims to have been born in the same year as Jesus Christ. Because he was born in June, not December, Revo is older than Jesus Christ [8]. He tries to keep up with weekly release of comics, but often fails, resulting in long nights of flipping through manga (usually on holidays or breaks) [9]. On March 3rd, 2012, Revo donated a million yen (about 10,000 USD) to the Japanese Red Cross in response to the 2011 Touhoku earthquake and tsunami [10].

Retrieved from "https://shlhw.miraheze.org/w/index.php?title=Revo&oldid=5171"
Cookies help us deliver our services. By using our services, you agree to our use of cookies.