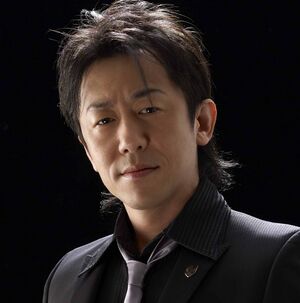 じまんぐ (Jimang) was born October 16th in Nagasaki, the year is unknown. He is a Japanese singer and writer, musician, producer, and a radio DJ. Known for his wild and outlandish personas, his personality resounded with fans.

In the past he was a fireman, but around 1997 he moved to Tokyo to start his musical career. In 1998 he founded indie-label "IIL" (INTERNET INDIES LABEL) and the Internet radio program "Jimang the Entertainment ～君もJazzyに生きてみないか"Citation needed. A year later he published his first mini album called "Core 1 Style" under the band name "DECO LECO"Citation needed. After this, the band broke up and he departed to pursue his own career. In 2003, he joined Sound Horizon as a support member with the release of Lost. He participated in every Sound Horizon work after this, excluding イドへ至る森へ至るイド, ハロウィンと夜の物語, and いずれ滅びゆく星の煌めき（ヴァニシング·スターライト）. After the major debut of Sound Horizon in 2004, he released his own album, "じ ま ん ぐ の 世界 〜 胎動 〜". The next year, he released his first maxi single, "じ ま ん ぐ 〜 世界 〜Core〜". He released two more solo albums; "じ ま ん ぐ の 世界 〜 Balance〜" and "じ ま ん ぐ の 世界 〜 儚 き も の た ち へ 〜" in 2007 and 2008 respectively before releasing his most popular work, "la divina tragedia 〜 魔 曲 〜" in September of 2009. The main song off of this album was the OP for the anime "うみねこのなく頃に". In addition to his musical career, with more than 15 albums and 2 DVD releases in hand, he also acts as a sound producer for idol groups like SKE48 and HKT48Citation needed.

He joined Sound Horizon in 2003, when 3rd Story CD Lost was released on Comiket Market 63. He declined to participate in ハロウィンと夜の物語, but returned for 9th Story CD Nein. Jimang has also participated in the majority of SH related events, including concerts, fan events, and lives. Revo said that Jimang was a very important person for him and that without Jimang, SH couldn't existCitation needed. Jimang supported Revo when AramarY left the group and because of this Sound Horizon was able to continueCitation needed. Revo also said that many characters he created were created with Jimang specially in mindCitation needed.

After 7th Story Concert 『Märchen』 ～キミが今笑っている、眩いその時代に･･･～ and Sound Horizon Live Tour 2011 -第一次領土復興遠征-, Jimang said he grew tired of Sound Horizon and wanted to take a break to concentrate on his own music, and that he would prefer not to participate in further Sound Horizon or Linked Horizon releases. However, Jimang returned for Nein in 2015, and participated in the 9th Story Concert 『Nein』～西洋骨董屋根裏堂へようこそ～. During the tour, Jimang wrote on his twitter that after a long long time of convincing, Revo persueded Jimang to return to SH. He said he was happy to return and experience the special atmosphere of SH again Citation needed.

In February of 2019, Revo's Acoustic Party was announced[1]. There were four concerts in total. For the April 29th concert, Revo performed 黄昏の賢者 and afterwards gave an emotional speech about Jimang. Recollecting on past years, Revo lamented that Jimang declined to join for RAN. Being the independent musician that he is, Jimang has a different outlook on music compared to Revo's, and they often fought over itCitation needed. Revo added that he respected and supported Jimang's decision, and that despite SH being Revo and solely Revo's Jimang played a vital role in how it got to where it is today. Revo said he dedicated his performance of 黄昏の賢者 to Jimang, and that if Jimang doesn't want to be in SH and would rather focus on his own career we must all respect his decision. Revo also added that when the Near Future someday arrives, it will be drastically different without Jimang. Ending the speech, Revo asked Laurants to let Jimang know about this speech, as Revo couldn't directly say this to JimangCitation needed.

Laurants spread this information to Twitter, eventually reaching Jimang, who had his own acoustic concert a few days before. Jimang said that since he met Revo, Revo had always been "人だらし", a man who, with sweet words and gentle behavior, could inspire you to do anything)Citation needed. For Jimang, Revo was a super talented person who could be too harsh at times. Jimang loved Revo and SH, and that Revo taught him that in this world, there are many people who he could trust and be supported by. However, Revo was always too demanding on people, especially himself. Jimang recalled working with him, saying that it wasn't always easy or simple, but was always motivating. Despite knowing his own music career could never be as successful as if he stayed with SH, and that he may not be as talented as Revo, Jimang was resolved to continue pursuing his own career no matter whatCitation needed. He ended his thread by saying Revo and him were still on good terms, and asked Laurants to spread the wordCitation needed.

Retrieved from "https://shlhw.miraheze.org/w/index.php?title=Jimang&oldid=3580"
Cookies help us deliver our services. By using our services, you agree to our use of cookies.